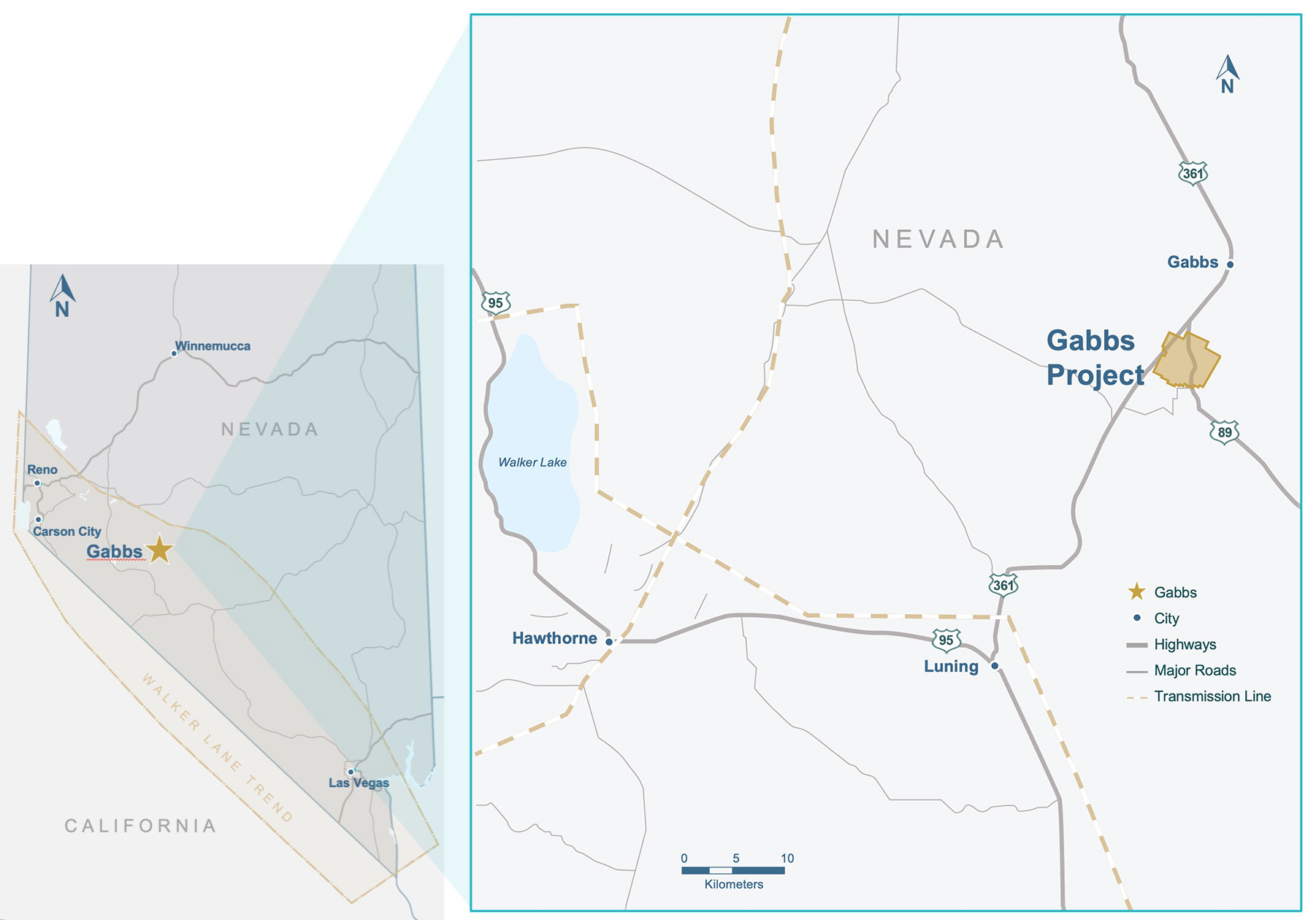 The Gabbs Project is comprised of 421 unpatented lode mining claims and one patented lode mining claim covering four known zones of mineralization and comprising approximately 3,300 hectares.  Access is good, with Nevada Highway 361 and Gabbs Pole Line Road crossing the property. A powerline also crosses the property, and a major transmission line is located within 30 kilometers.  Access to water by permit is available.

Prior to P2’s 2021 drill program, the mineralized zones at Gabbs had not been tested along strike or at depth, and of the 494 holes drilled at Gabbs between 1970 and 2011 by various operators, 180 holes (36%) ended in mineralization. Also, a significant number of holes drilled prior to 2004 were, depending on the focus of the operator, assayed only for gold or only for copper, not both metals.  During the low metals price era of the 1980’s/1990’s, prior operators were focused principally on oxide gold and contemplated an open pit heap leach operation for Gabbs.

P2 is using a systematic strategy to explore for a large porphyry-related copper-gold system at Gabbs.  Drilling will focus primarily on the known zones of mineralization to expand and improve the confidence in the mineral resources.  Drilling will be spaced for minimum Indicated Mineral Resource category, targeting the full depth of the zones and assaying for the full suite of elements.

A National Instrument 43-101 Technical Report will be prepared by P&E and posted on www.p2gold.com and the Company's profile on www.SEDAR.com by March 28, 2022.

P2 plans to advance both exploration and engineering through 2022.  As expected, a mineral resource estimate update was announced on February 10, 2022 that incorporates the results of the 2021 drill program and Phase One and Two metallurgical programs.  An over 4,000 meter drill program commenced in January 2022, which may be expanded, and is expected to be followed by a further resource estimate update targeted for the fall of 2022.  On the engineering front, the Phase Two metallurgical program is underway and expected to be completed in the first quarter of 2022.  Work will then begin on a preliminary economic analysis with completion targeted for the fourth quarter of 2022.

The first metallurgical program was conducted using two composite samples from surface locations in the Sullivan Zone to evaluate the recovery of copper and gold from oxide mineralization, as the 2021 Mineral Resource estimate assumed zero recovery of oxide copper mineralization. The results of these tests demonstrated a recovery range from 96.3% to 98.1% (97.2% average) for gold and 91.2% to 99.1% (95.2% average) for copper.

For the second metallurgical program, the Company retained Kappes, Cassiday & Associates (KCA) in Reno, Nevada to determine the preferred extraction process for the Gabbs mineralization.  Based on work completed to date, KCA is proposing that the oxide material be heap leached and gold recovered as a salable doré and cyanide soluble copper produced as a salable copper sulphide concentrate.  For the sulphide material, KCA is proposing flotation to recover a salable copper concentrate with the flotation tails cyanide leached to recover additional gold as a salable doré and cyanide soluble copper as a copper sulphide concentrate.

The Gabbs property is situated within the northwestern end of the Fairplay Mining District and has been intermittently explored by various operators from the 1970’s until 2011.  Over half of the drilling during this period concentrated on the Sullivan porphyry gold-copper deposit.  Two pre-feasibility level studies were completed for Sullivan, in 1990 (by Gwalia Gold Mining) and 1995 (by Arimetco).  The most recent substantive exploration work on the property was completed by Newcrest from 2002 to 2008, which included geochemical and geophysical surveying and drilling.  Newcrest decided in 2009 to divest its US properties and Gabbs was acquired by St. Vincent Minerals Inc. in 2010. Prior to P2’s 2021 exploration program, no exploration work had been undertaken at Gabbs since St. Vincent’s work in 2011.

On May 14, 2021, the Company acquired all the assets that comprise the Gabbs Project located on the Walker-Lane Trend in the Fairplay Mining District of Nye County, Nevada pursuant to an asset purchase agreement dated February 22, 2021, as amended by an amendment dated May 4, 2021 among the Company, P2 Gabbs Inc. (a wholly-owned subsidiary of the Company) and Borealis Mining Company, LLC (“Borealis”).

To acquire the Gabbs Project, at closing the Company paid US$1 million to Borealis (an indirect, wholly-owned subsidiary of Waterton Precious Metals Fund II Cayman, LP (“Waterton”)), and issued 15 million shares in its capital to Waterton.  In addition, the Company is required to pay to Waterton Nevada Splitter LLC, an affiliate of Borealis, (a) US$4 million on the 12-month anniversary of closing and (b) US$5 million on the earlier of the announcement of the results of a Preliminary Economic Assessment and the 24-month anniversary of closing.  Borealis has reserved for itself a 2% net smelter returns royalty on production from the Gabbs Project, of which one percent may be repurchased at any time by P2 Gold for US$1.5 million and the remaining one percent of which may be repurchased for US$5 million.